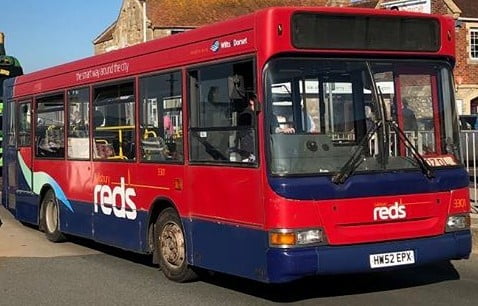 Dennis Dart SLF/Plaxton Pointer MPD, HW52EPX, was the first low floor vehicle purchased by Southern Vectis for their Isle of Wight operations, arriving just ahead of a batch of 7 Volvo B7TLs which were the first low floor double deckers operated by that concern. Numbered 300, the bus was a one-off purchase for an internal contract at a tourist attraction which was subsequently not won, and the vehicle joined earlier step-entrance Dennis Darts on normal service work. Later repainted into green livery with white triangle patterns in early 2005 to match 14 similar vehicles delivered in early 2005, the bus was unique in that it never received the then new (Go Ahead style) Southern Vectis green livery but did have a partial repaint in 2007 at which point the white triangles were removed. One of the earlier departures of the type from Southern Vectis, the bus was transferred to Wilts & Dorset’s Salisbury depot during 2010, receiving “Salisbury Reds” livery (blue and red at the time). Withdrawn in December 2017, the vehicle (which had latterly been numbered 3301) was stored until September 2018 when generously donated by Go Ahead to become part of the IW Bus Museum collection.